It’s World Cup fever here at Littledata. Although two of the nationalities in our global team didn’t get through the qualifiers (US & Romania) we still have England and Russia to support in the next round.

And I think the World Cup is a perfect time to explain how marketing attribution works through the medium of football.

In football (or what our NYC office calls ‘soccer’), scoring a goal is a team effort. Strikers put the ball in the net, but you need an incisive midfield pass to cut through the opposition, and a good move starts from the back row. ‘Route one’ goals scored from a direct punt up the pitch are rare; usually teams hit the goal from a string of passes to open up the opportunity.

So imagine each touch of the ball is a marketing campaign on your site, and the goal is a visitor purchasing. You have to string a series of marketing ‘touches’ together to get the visitor in the back of the net. For most ecommerce sites it is 3 to 6 touches, but it may be more for high value items. 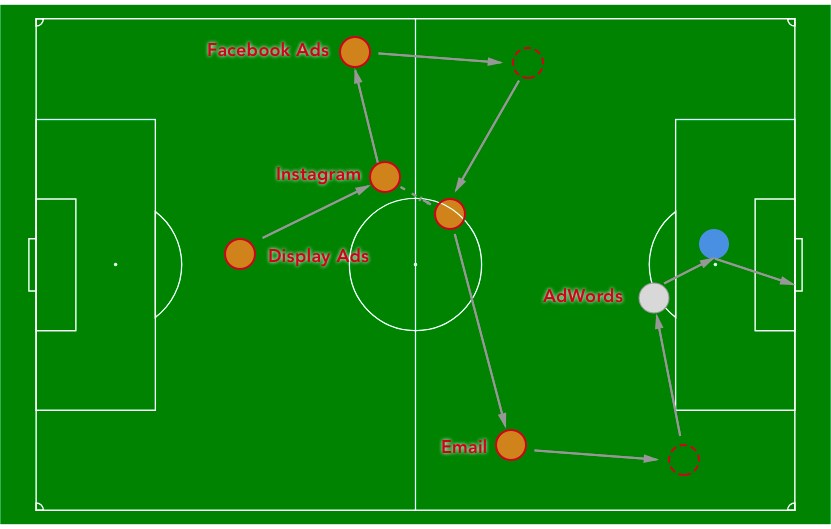 Now imagine that each player is a different channel. The move may start with a good distribution from the Display Ads defender, then a little cut back from nimble Instagram in the middle. Facebook Ads does the running up the wing, but passes it back to Instagram for another pass out to the other wing for Email. Email takes a couple of touches and then crosses the ball inside for AdWords to score a goal – which spins if off the opposing defender (Direct).

In this neat marketing-football move all the players contribute, but who gets credit for the goal?

Well that depends on the attribution model you are using.

Marketing attribution as a series of football passes

This is a simplest model, but less informative for the marketing team. In this model the opposing defender Direct gets all the credit – even though he knew nothing about the end goal!

This is the attribution model used by Google Analytics (and other tools) by default.

In this model, we attribute all of the goal to the last campaign which wasn’t a Direct (or session with unknown source). In the move above this is AdWords, who was the last marketing player to touch the ball.

But AdWords is a greedy little striker, so do we want him to take all the credit for this team goal?

You may be most interested in the campaign that first brought visitors to your website. In this model, Display ads would take all the credit as the first touch. Display often performs best when measured as first interaction (or first click), but then as a ‘defender’ it is unlikely to put the ball in the net on its own – you need striker campaigns as well.

This model shares the goal between the different marketing players. It may seem weird that a player can have a fraction of a goal, but it makes it easy to sum up performance across lots of goals.

The player who was closest to the goal gets the highest share, and then it decays as we go back in time from the goal.

This is a model available to Google Analytics 360 customers only. What the Data-driven model does is run through thousands of different goals scored and look at the contribution of each player to the move.

This should be the fairest way to attribute campaigns, but the limitation is it only considers the last 4 touches before the goal. You may have marketing moves which are longer than 4 touches.

Finally you can define your own attribution weighting in Position Based model, based on which position the campaign was in before the goal. For example, you may want to give some weight to the first interaction and some to the last, but little to the campaigns in between.

Still confused? Maybe you need a Littledata analytics expert to help build a suitable model for you. Or the advice of our automated coach known as the analytics audit. After all, every strategy could use a good audit to make sure it’s complete and up-to-date.

So go enjoy the football, and every time someone talks of that ‘great assist’ from the winger, think of how you can better track all the uncredited marketing campaigns helping convert customers on your site.

Everything you need to know from Shopify Reunite 2020

6 FAQs you may have asked during a Littledata demo