Over the past few months we’ve been working on a new feature for Littledata users. Our new Missions feature is a data-driven recommendation engine for ecommerce optimisation.

The Missions concept is simple, yet powerful. First, you connect Google Analytics in order to see how your site is performing relative to the benchmarks in your sector. Then, if you are underperforming in any given area, the app will suggest some specific optimisation missions. 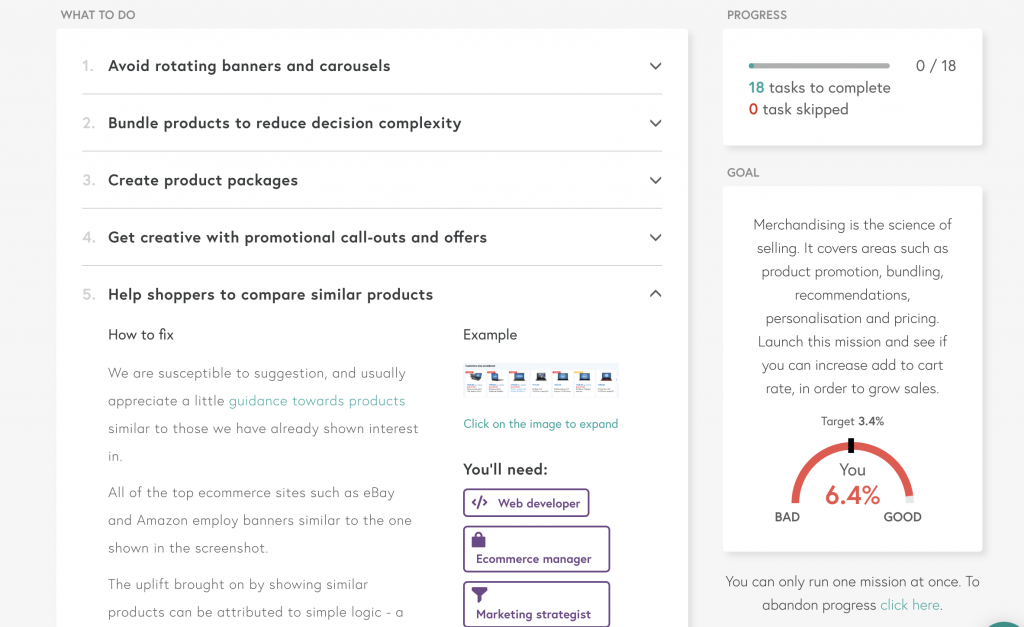 Now, you might think that in 2018 the vast majority of ecommerce websites are serious conversion machines, but that’s simply not the case. Most websites remain woefully under-optimised and are leaving way too much money on the table. Checkouts are abandoned, users bounce before pages load, forms are left uncompleted, and so on.

This is becoming a big problem, given the competitive landscape in many sectors. Acquiring new customers is increasingly expensive. A surefire way to make your marketing budget go further is to optimise your website, but where should you start?

This is precisely where Missions comes into play: you launch individual missions and work your way through the suggested tasks to improve ecommerce performance, metric by metric.

We’ve spent a lot of time researching optimisation techniques that have been shown to work for other companies. That’s not to say that they’ll definitely work for you, but proven ideas are usually well worth testing.

We now have hundreds of actionable ideas, which have been clustered together into launchable ‘missions’.

And since Littledata is good at measuring the little data, you’ll be able to see the results of your efforts within the app.

Who should use Missions?

Missions is for anybody that wants to optimise a website. It can be used by large digital organisations, SMBs and micro businesses. It is particularly useful for agencies with multiple clients, especially where there are recurring optimisation tasks over multiple websites.

The ideas in each mission include guidance on who should be involved in implementation. Roles include ecommerce manager, web developer, copywriter, marketing strategist, and UX designer.

How to launch a mission

Start by connecting Google Analytics, so we can help you measure success and prove ROI.

Once connected we’ll run a quick check to make sure your analytics setup is in good shape (the app will suggest fixes, if anything is awry).

You can then compare your performance against your peers, to identify areas that are ripe for improvement. We’ll show you this at the top of your dashboard:

By drilling down into each of the above categories you’ll be able to see the detail. As an example, let’s look at the main metrics in the ecommerce category. You’ll see your own data alongside ecommerce benchmarks from your sector (based on data from more than 12,000 websites). This makes it easy to compare and contrast performance. It looks like this: 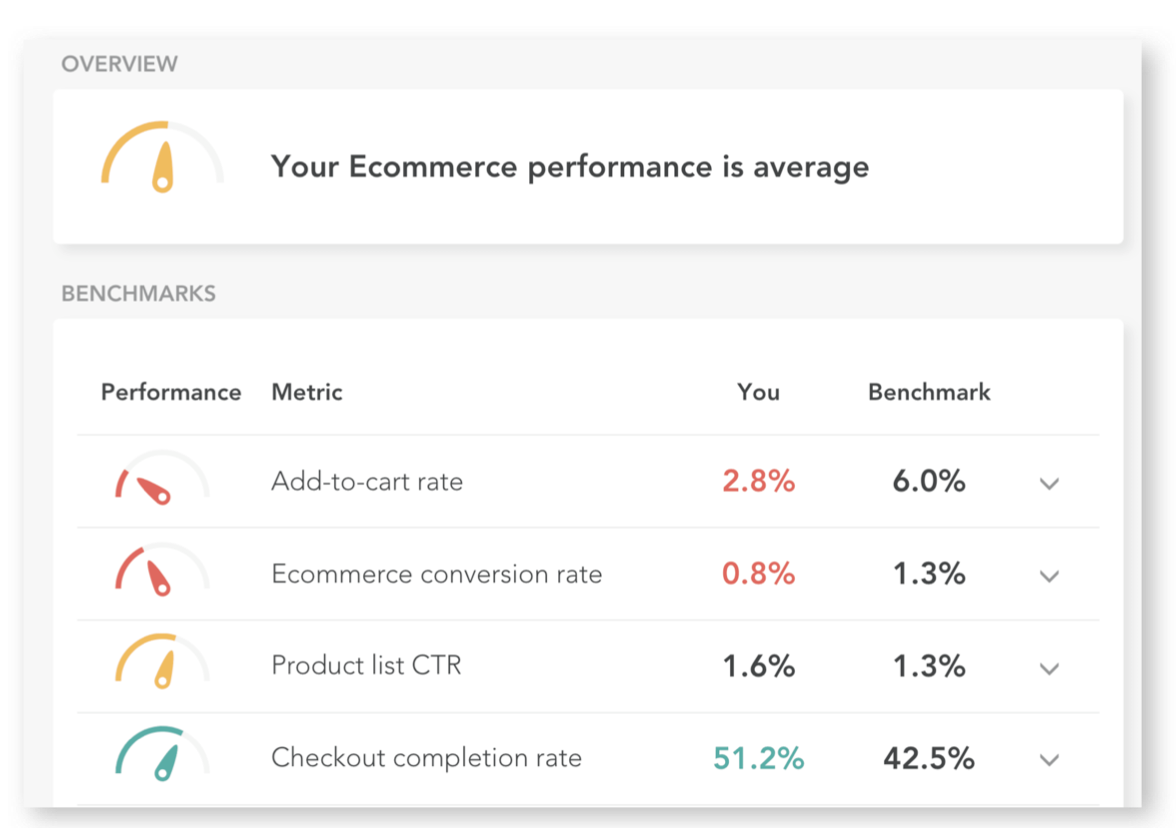 In the above example you can see that ‘add to cart rate’ and ‘conversion rate’ are both considerably lower than the norm. Both of these areas are ripe for improvement.

Another metric in the ecommerce category is average order value. For this particular sector the average is $28, and while this particular website is doing reasonably well, it isn’t yet a top performer. Increasing AOV is one of the quickest ways of growing revenue, so we can launch the following mission: 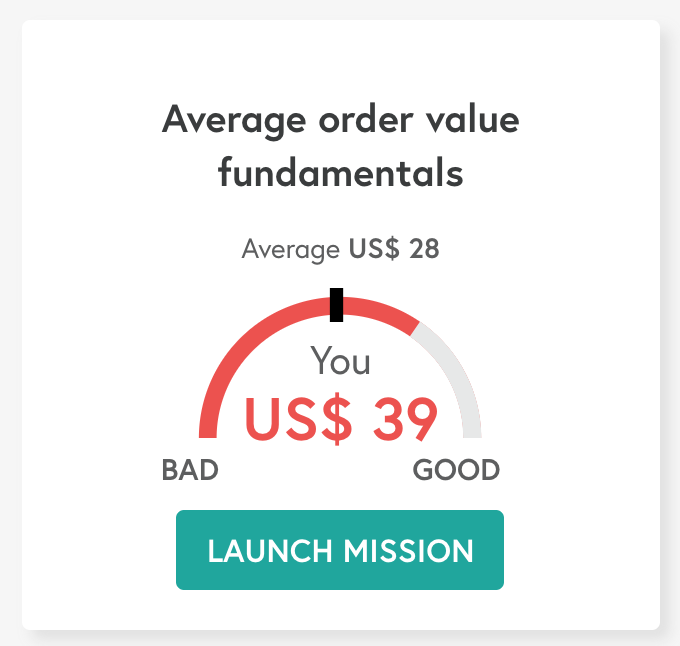 So, this first mission – ‘Average order value fundamentals’ – will help you to incrementally increase AOV. It includes ideas in areas such as product bundling, cross-sells, up-sells, wishlists, pricing strategies, personalisation, social proof, and so on.

Here’s what the mission looks like – note that each tip can be expanded to reveal more information: 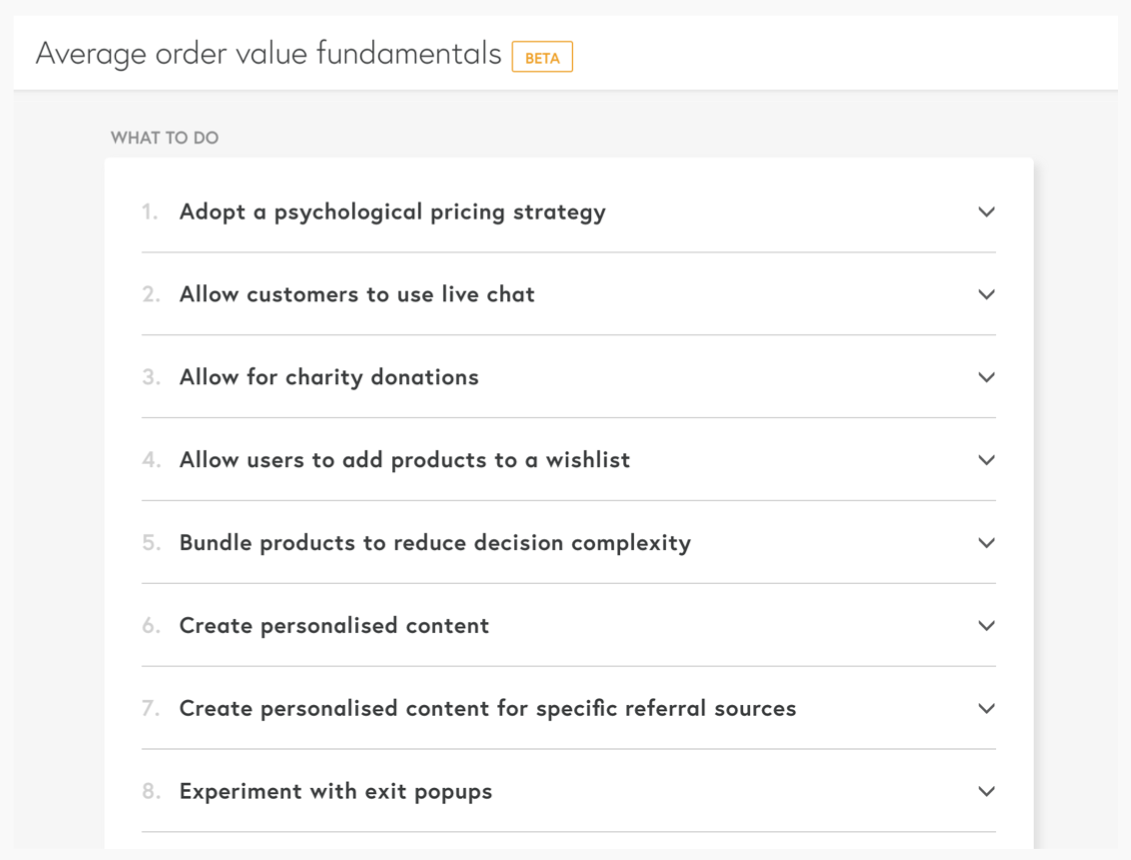 You can work your way through the mission and implement (or skip) the ideas. Press the ‘mark as complete’ button to start tracking performance.

Once you have done that we will start monitoring performance: 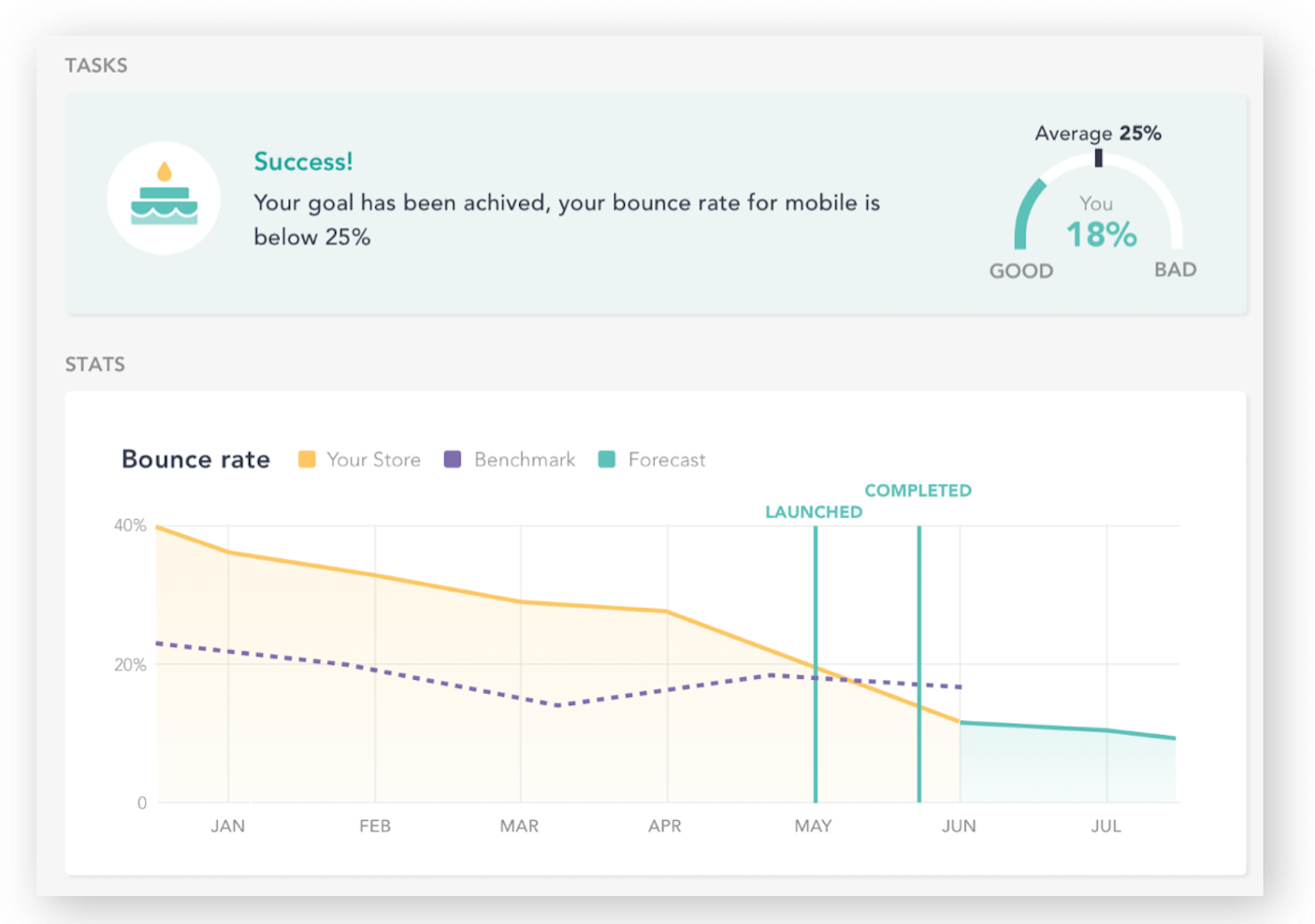 Missions should generate considerable – and provable – ROI for the SMBs, corporates and agencies that use it. Work your way through the missions to improve the customer experience, and remove the friction from the buying process.

The first iteration of Missions is natural next step for Littledata. Our long-term goal is to develop Missions into an AI-driven optimisation engine for ecommerce teams. We hope you’ll join us for the ride.

People trust Littledata to audit, fix and automate reporting. They also use our benchmarks to check and compare their performance, relative to their peers. And now, with Missions, digital teams can set about actively increasing ecommerce revenue.

We hope that Littledata Missions will help you to fast-track your goals and KPIs. Give Missions a try today and shoot for the moon.

Head of content for Littledata. Formerly of Econsultancy, where he spent a decade observing ecommerce and web optimisation at close quarters. Has a ton of experience helping startups with content, marketing, product development, and growth.

For many Shopify stores, it's an all-too-familiar question: why do online shoppers decide last-minute not to buy a product? Whether you're on Shopify or Shopify Plus, shopping cart abandonment is a serious issue. But surprisingly the main reasons for visitors and even current customers abandoning their carts (ie not making it all the way through your checkout flow) are actually shared by many merchants. On the plus side, so are the ways to reduce cart abandonment! Cart abandonment is not a mystery. While not every reason a shopper abandons their cart is within your control, some things are in your hands. When your cart abandonment rate is high, there are active steps you can take toward minimizing it. [tip]Download the Shopify merchant's guide to reducing cart abandonment for free[/tip] Maybe you've spotted lower checkout completion rates on mobile, or maybe it's a cross-device issue. Maybe it's a significant issue for paid traffic, organic, or both. But first, let's explore cart abandonment from the ground up: What it is Why it matters Why it's a crucial metric, not a mystery What causes cart abandonment? While there’s no quick answer, carts get abandoned for a variety of reasons — although a lower abandonment rate tends to reveal a more intuitive customer experience and a more trustworthy store. Many shoppers may browse your store in hopes of finding a hidden discount, to compare prices, or to see how your product stacks up against similar products. Some shoppers might even be building a wishlist for the future, with no intention of purchasing right now. For this type of shopper, there’s not much you can do to compel a purchase. This means your focus should be on the shoppers who are willing to buy but haven’t, maybe due to a website element or step in the checkout process that sent them scurrying away. As part of the same cart abandonment study, the Baymard Institute conducted a survey of over 4,500 US adults asking why they abandoned their purchase after passing the add-to-cart stage: Many of the factors above can be countered by making tweaks to the checkout process. (We cover as many as possible in our free cart abandonment ebook.) For example, let’s take the second most prevalent response — the site wanted me to create an account. By offering a guest checkout option where an account is not necessary, this 28% group would be one step closer to a purchase, helping you avoid an abandoned cart. How can you improve your checkout experience? Industry lingo like “streamline the checkout process” is often thrown around, but what does this actually mean? What are the parts of your site that eliminate friction in the checkout process rather than causing it? More specifically, we’re referring to the step after a user adds a product to his or her cart. Optimizing add-to-cart rate is, in itself, a separate stage in the purchase funnel that we have discussed before. In any case, here are a few things to consider for a better checkout experience... [subscribe heading="Don't wait to reduce cart abandonment" background_color="green" button_text="Download our free guide" button_link="https://www.littledata.io/app/cart-abandonment-ebook"]

Top 5 ecommerce benchmarks to track during the holidays [free ebook]

Historically, early-through-late December is one of the biggest sales seasons of the year for ecommerce businesses. We recently took a look at some of the more popular ecommerce metrics and created 20+ benchmarks specifically tailored to the current sales season. With our Benchmark your site tool, compare your site's engagement and conversion metrics with over 10,000 other websites this holiday season. [note]Want to know where you store stands during Black Friday Cyber Monday weekend? Check out our top 9 benchmarks to track during BFCM.[/note] To give insight on your product and digital marketing, we gathered the data from Google Analytics from different industry sectors.  So why did we create the benchmarks? Let's take a quick look at last year's holiday sales. Holiday ecommerce sales in 2018 For ease's sake, let's define the holiday shopping period from November through the end of December. Last year, Digital Commerce 360 estimated shoppers spent $122.0 billion with online stores — a massive 17.4% jump from 2017. They also estimated total ecommerce sales grew ~5.6% over the same period, according to their holiday 2018 estimates report. From the same report, ecommerce represented nearly 17% of all holiday spending, up from 15.2% in 2017. Explaining the numbers Over the past decade as online shopping has become more of a preference for consumers (especially when it comes to gift-giving), shoppers have browsed more sites for gift ideas, deals, discounts and more. Shoppers are exercising their options (and taking advantage of stiff seasonal competition between stores), which often leads to increased spending volume across multiple stores — though this may cause stores to see a drop in average order value (AOV)  per customer. Of course, stores tend to also increase their digital marketing spend during hot sales periods and peak shopping seasons, which leads to more online sales. What about this December? This past weekend alone (Black Friday Cyber Monday), Shopify reported record-breaking global sales numbers ~$2.9 billion. On the Shopify network alone — which now boasts over 1 million merchants — merchants across 175+ countries sold $2.9+ billion, up from last year’s $1.8+ billion. While the holiday shopping period (which is underway) does not necessarily stack up to BFCM weekend by sheer sales alone, it's a terrific chance for companies to finish out the year strong or get rid of extra inventory from BFCM. Since December will yield massive sales figures to round out 2019, it's crucial to track the metrics that matter to your store. If you don't know where you stand among the stores you compete with, what's the point? That's why we created a free ebook to help you stack up: Top 5 ecommerce benchmarks to track during the holidays. [subscribe heading="Download the top 5 benchmarks free" background_color="green" button_text="get the ebook" button_link="https://www.littledata.io/app/top-5-holiday-benchmarks"]