Why Shopify is still the best ecommerce platform for larger merchants

Why Shopify is still the best ecommerce platform for larger merchants

It’s no accident that Shopify is the cream of the crop in the world of enterprise ecommerce. But what do Shopify’s major announcements last week mean for the platform’s growth going forward?

To remain on top, Shopify must continue investing in areas of opportunity and customer need. That’s exactly what they’re doing, including major investment in an independent fulfillment network, multi-currency and multiple-store/multi-site improvements for Shopify Plus, and a stunning new range of developer-friendly APIs.

Who’s using what: ecommerce platforms by size and use

I’ve been crunching the numbers in several different ways these past few weeks, and my findings were consistent: Shopify is the platform of choice for mid-sized to large stores globally.

Shopify’s recent announcements confirm my research findings. Shopify will continue to be the ecommerce platform with the strongest growth in larger stores. 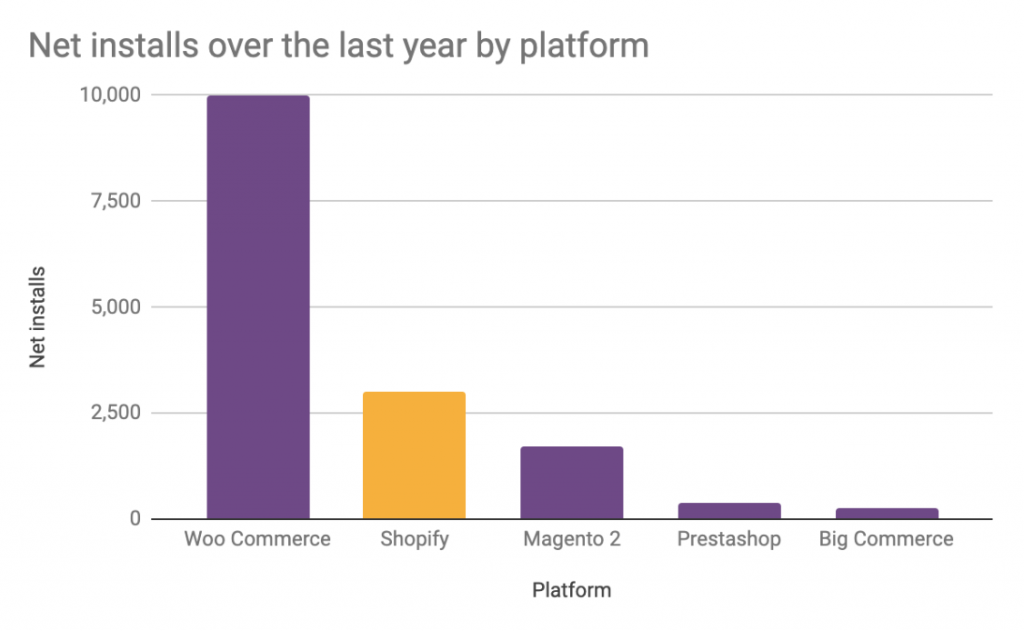 At first I looked at trend data from BuiltWith that showed the number of net installs on each platform over the past year. Only the top 1 million websites were measured (as defined by BuiltWith.com).

When it came to pure volume of installs, WooCommerce came out on top. However, the average WooCommerce store is much smaller and less active than the average Shopify store.

I confirmed this by looking at our own data set of over 4,000 stores on these ecommerce platforms: 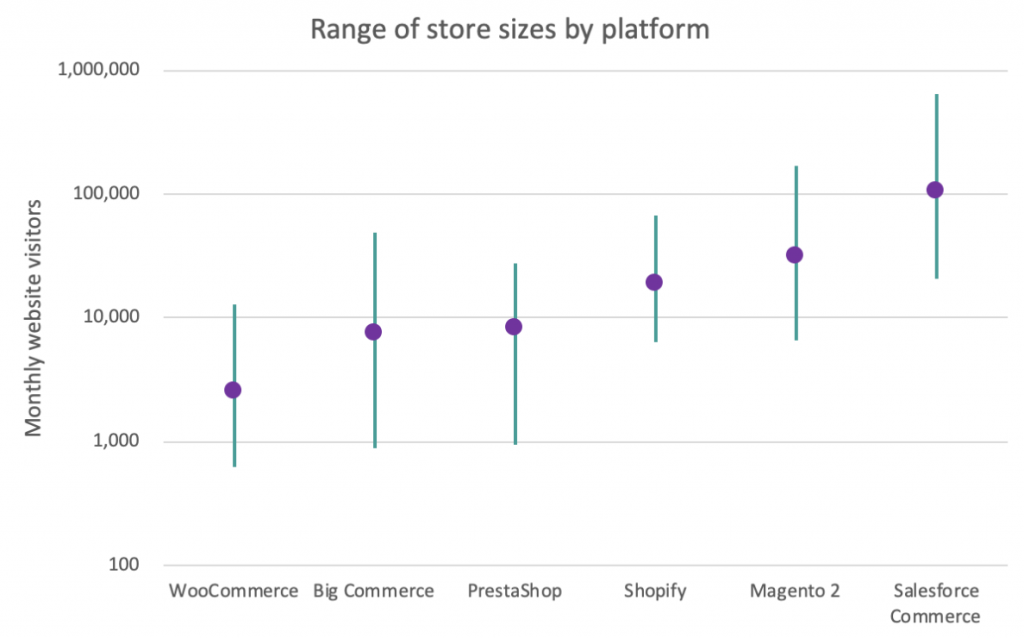 The bars represent range from the bottom to top quartile of store sizes, with the purple marker representing median store size.

By contrast, WooCommerce only had one quarter of stores receiving over 10,000 monthly visits — and zero stores doing more than 2.5 million visits in our data set.

In other words, if this trend continues, Shopify is positioned to take on a big share of the stores migrating from Magento 1 over the next year or so.

And that’s not all.

What this means for merchants using Littledata

These larger stores will need a range of robust apps to extend Shopify’s platform, especially when it comes to analytics.

We’ve responded to this need in a many ways, including:

In other words, Littledata’s commitment to Shopify’s ecosystem has only continued to grow. We hope the pattern continues as we hone our popular Shopify integrations like ReCharge for subscription analytics, and continue to improve our better smart connections for other popular apps (CartHook, Refersion, Bold Cashier) over the coming months.

What this means for Shopify users

In the past, global brands running a network of stores in multiple countries have been frustrated by the simplicity of Shopify’s setup.

The launch of features such as multi-currency, multi-language and multi-store login from a single Shopify Plus dashboard will go a long way in quelling those user frustrations — all while making Shopify Plus an attractive alternative for current users of Salesforce Commerce Cloud.

Fulfillment is the biggest headache for DTC brands selling globally, and FBA is currently the only game in town for end-to-end purchasing and logistics.

However, as ecommerce brands scale, more and more are looking to “own the experience” from start to finish. This includes branded packaging and visibility of delivery on the customers’ end.

Both of these things may very well have a better solution in Shopify Fulfillment Network:

Amazon vs Shopify. @aobtweetz says Shopify is like retail entertainment: consumers who want to read the blog, engage with the brand and then buy – not just buy a commodity on Amazon @debriefevent #ShopifyUnite

The network will start in the US. While it will take time to scale, early looks indicate it will be a sensible way for Shopify to spend its large pile of cash while pulling itself away from the crowded pack of SaaS ecommerce.

We developers love companies that don’t forget their product-first roots.

Much of Shopify’s growth has been due to making the platform easy to extend while encouraging a vibrant yet curated app store.

Shopify continues to exercise caution when offering its existing app partners access to new core features (subscription billing, opening up new APIs for partners to develop on). A staggering 11 new APIs were announced at this Unite alone.

While Shopify clearly believes that core experiences like checkout and payment should be owned and developed by Shopify itself, many non-core features (including many types of reporting) are actively pushed to partners with a relevant app or service.

A living example of Shopify’s developer-first approach? Their new Shopify app CLI, which speeds up timetables for new app launches.

Where does Shopify go next?

After more than doubling its number of active stores over the last two years, Shopify’s current haul of 820,000 active stores is in good position to surpass 1.5 million stores within the next two years.

At a recent Commerce Plus event in London (organised by Shopify Plus), the main “complaint” was that Shopify’s sales reps “can’t onboard shops fast enough”.

With a newly revamped, user-centered design, Shopify Plus is an exciting platform to be a part of right now. It’s only going up from here.

If you didn’t get a chance to read about everything Shopify announced last week in Toronto, don’t worry. We have you covered! Check out our full recap of announcements.

Also, check out our award-winning Google Analytics Shopify app. With AI-based tech, the app fixes your Shopify analytics by providing:

Wondering how your site compares? Check out our list of essential benchmarks for Shopify stores.

It’s been a banner year for Littledata on BigCommerce. Our Google Analytics app for BC has been highlighted and recommended by BigCommerce merchants and account managers, and we were recently honored with a multi-week feature in their app marketplace! Our data experts work with thousands of DTC Brands and know what brands are looking for in their advanced Google Analytics integration for their ecommerce store. At the core our customers care most about getting accurate and detailed information about customer behavior, from finding the best organic marketing channels to understanding granular details like how to improve checkout conversion rates and build better retargeting audiences. Our fast growth on BigCommerce hasn’t come by accident. With full support for both GA3 (Universal Analytics) and GA4 (the newest version of Google Analytics), we’ve met a major need for BigCommerce brands to have accurate, unified data in the tools they are already using – while preparing for a world without cookies. Our first customer review on BigCommerce app store might still say it best: “Google Analytics is a monster, and overwhelming to new users like myself. When the data in GA does not match the data in BigCommerce, making proper marketing and ad budget decisions becomes an even more difficult task. The Littledata Connector for Google Analytics and their All Website data configuration in GA opens a whole new world of clarity….confirming the true conversion value of Google (cpc), Bing, Social Media as well as referral revenue and conversions” The announcement of Google sunsetting Universal Analytics and the implementation of GA4, have some people in the industry confused and worried. But have no fear, Littledata is the first app to offer automated server-side tracking for Google Analytics (UA + GA4) including subscription analytics (Recharge) and Facebook Conversions API (BETA). We’re seeing especially strong growth from BigCommerce merchants on enterprise plans, which now drive more than 70% of BC’s ARR. What’s driving that growth? A big part of it seems to be multi-storefront capabilities. This feature is super slick and makes it easy to run several different storefronts in sync, whether different country stores for different regions/locations or different microsites for unique customer segments, such as separating out men’s fashion from women’s fashion or just overall clothing from accessories. The best part is that Littledata tracks any number of BigCommerce storefronts, allowing you to have a global overview of your business while still being able to segment through each storefront's data in Google Analytics. So if you’re making data-based decisions and looking for an easy to implement solution for your BigCommerce store, reach out to us to learn more!